Top Posts
Declaring Independence from Fear
Why Do Kids Behave the Way They Do?...
Chasing the Genetic Ghosts of Mental Illness
Transparency, Kupfer and the DSM-V
Thankful for My Dad
Putting Cool Ahead of Science: TweetPsych
Online Mental Health Journalism Awards: 2009
Texas Punishes 268 Abusive Employees
9 Myths of Bipolar Disorder
Twitter is the New Blogging, With a Twist
Home Aging A Long Journey Home 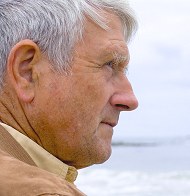 I flew back from a conference last week sitting next to a man who was flying to Boston, so that he could drive to Springfield to bury his sister. He told me this as matter-of-factly as if he were telling me about his business, a deal he had just closed, or his favorite hobby. And then he broke down and started to cry.

It had been a long but peaceful trip. The man, whose name I never got, had been very quiet throughout the trip, hadn’t read anything, and seemed to doze for a bit from time to time. He was a very considerate neighbor who kept to himself. But as we were close to landing, he relayed the brief story of his trip. His sister had died and he was going home to bury her.

I touched the man’s shoulder as though he were my father (he could’ve been my grandfather by age). I felt so keenly for him and his loss, and I don’t know. The human experience, where loss is universal, and the sadness and awkwardness that accompanies it… also universal.

I fell silent. I wanted to ask questions, to show my interest and my curiosity, but I couldn’t — I didn’t want to intrude. I didn’t know how he felt about it. He continued on in the silence between us and told me had lived in Texas nearly all of his life. This was the first time he was back up to Boston in decades. I felt especially bad that he seemed to move away from his family, and that he lost touch with them, as it must have resonated on some level with me and my family, too.

And in that respect, I suspect that I’m not unlike many, many people. People who want to say things to their family, their loved ones, but keep waiting until it’s too late, until they’re dead and buried, and then whisper those words while praying over them: “I loved you once” “I wish I had spoken to you more” “I’m sorry we never made up after that fight.”

I don’t feel that way particularly toward any of my family (in terms of expressing something I can’t say)… And yet, I still felt the loss of that stranger on that plane almost as though it were my own loss. Perhaps it was felt more acutely because of my mom’s sister’s recent death, leaving my mom only the third remaining child (out of 10), and only remaining daughter, in her family. It brings the brevity of human life home.

In that man on the plane, I saw me, the man I will be some day, flying somewhere, to some destination, to attend some funeral of someone that I should’ve kept in touch with better. Such people are like Rorschach inkblot tests in our own lives, because they reflect all of our own suffering and grief and loss. This is not a man from Texas flying home to bury his sister. This is Everyman (and woman), flying some place, to bury some one they left behind.

In that man, I felt my age, my experiences, my years. I saw in his eyes the wisdom that age brings, but also the sorrow such wisdom can carry along with it.

When we deplaned, I wished him well and a safe trip. I knew not what else to say.

He stopped walking, put down his suitcase and shook my hand, “Thank you,” he replied with sincerity and great warmth. It was a handshake I won’t soon forget.

He was only looking for a little compassion that day. And that day, I had only what little to offer him — I just hope it was enough.

Dr. John Grohol is the founder of Psych Central, which was sold to Healthline in 2020. He is a psychologist, author, researcher, and expert in mental health online, and has been writing about online behavior, mental health and psychology issues since 1995. Dr. Grohol has a Master's degree and doctorate in clinical psychology from Nova Southeastern University. Dr. Grohol sits on the editorial board of the journal Computers in Human Behavior and is a founding board member of the Society for Participatory Medicine. You can learn more about Dr. John Grohol here.

Why Do Kids Behave the Way They Do?...

Transparency, Kupfer and the DSM-V

Thankful for My Dad

Putting Cool Ahead of Science: TweetPsych

Today I’m greiving over a family situation too.My elderly mother lives far enough from me that I don’t see her often. My brother lives with her. She has dementia and wandered from home half dressed. Neighbors called police they took her to hospital. My brother won’t communicate with me. I hope I can still talk on the phone with Mother and he doesn’t ruin that little bit we still have. I’m sad over the loss of him too. I’m not against him. I can only speculate whats going on in his mind. Thank You

Loosing someone we really care about is not easy. Still, we have to survive the moment and go on with our “miserable” existence.

I appreciate your response Joseph. It’s given me alot to think about in terms of losing or loosing someone. In the language of the 12 steps loosing would be ” turning it over”.I’m in agreement with that. It is a comfort to be acknowleged and heard.

This article provides several good points. I wish more young people could reflect upon life or at least think of life in the ways this article encourages one to.

I have a family member who constantly argues with his mother and he visibly disregards her feelings, thoughts, and intentions. She believes she is doing what’s best for him, but he isn’t wise enough yet or grateful enough to appreciate at least her efforts. A big person is able to (despite not agreeing with a person) appreciate what that person is saying or at least consider what that person believes is right. He is unable to do this and constantly fights his 55yr old mother. Pride is in the way.

Essentially, he has gone on with his life and pushed his mother out. They don’t speak and she doesn’t see the grand-children.
I appreciate my mother a lot, even though we may not agree on everything. I appreciate her wisdom and the many years she’s experienced life has affored me knowledge ahead of my time because I listen to her wisdom. I don’t konw what I would do without my mother’s perspective on a lot of things.

It is sad that some people must find this out when the other person is gone, has moved far away, or has died or become extremely ill. Some people say “life is too short” and truly believe that, yet, they don’t quite live that out in their lives and in their relationships. While there are some relationships I believe are not always reconsilable, life is certainly too short, and it would be to the benefit of many relationships if people took this saying truly to heart.

We're sorry, but we're closed to new questions at this time.